The arrival of the first Imire rhino | Imire Rhino Conservation

The arrival of the first Imire rhino

How it all began - the first Imire rhino

The arrival of our new baby white rhino got us to reflecting on how it all began for us here at Imire, and the excitement about the arrival of the first Imire rhinos way back in 1987. It's hard to believe that we have been grateful custodians of these incredible and iconic animals for more than 30 years.

By the mid 1980’s the black rhino had been all but poached out of the Zambezi Valley, one of Zimbabwe's most pristine wilderness areas. It's location, being the northernmost river border between Zimbabwe and Zambia, has made it one of Zimbabwe's most poached regions - vulnerable to quick in-and-out sorties by armed poachers arriving and leaving by boat.

The Zimbabwe Parks and Wildlife Management Authority darted many of the remaining rhino and moved them to 'Intensive Protection Zones' (IPZs). They created new breeding nuclei to preserve genetic variability, on the basis that private conservancies could better protect the rhinos from poaching. Norman (Travers) approached the Department of National Parks to express his interest in helping. The habitat was of concern to the IPZ team, Imire being located in a highveld region and black rhino being more at home in the dry heat of the lowveld. Norman persisted, and in due course, seven rhino calves, all orphaned by poaching, came to Imire from Ruckomechi. 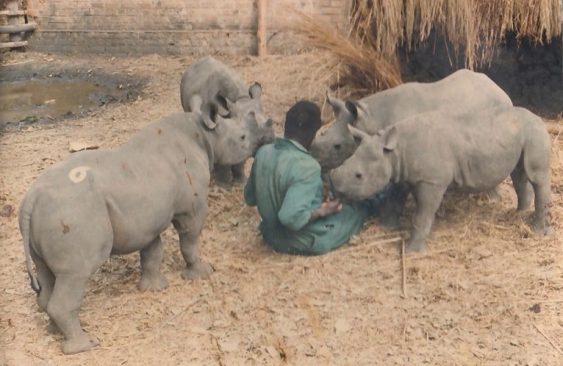 Norman's own words, an excerpt from "Imire: The Life and Times of Norman Travers as told to Cathy Buckle":

“The seven black rhino calves that I collected were between 4 and 6 months old and had already been named by Parks staff. There were three males - Noddy, Sprinter and Fumbi, and four females - Cuckoo, DJ, Amber and Mvu. Mvu had no ears, as they had been bitten off by a hyena.

When they arrived at Imire, all seven calves were put into a boma near the main homestead, and we began bottle-feeding them immediately. We had a lot of help from our friend, the government vet Dr. Chris Foggin. He was a real “fundi” (expert) on hand rearing black rhino calves and specified all necessary dried milk powder and concentrates that they needed. Along with his other useful advice we found that they settled down quite remarkably quickly. Milk was given three or four times a day - a two litre bottle for each calf - and the bottles were fitted with large calf teats.

Alongside their milk we soon introduced the rhinos to game cubes and thorn bush branches (to teach them how to browse) and, after a very short time, they were ready to go on walks with a handler. Right from the beginning we had rhino guards. With the help of National Parks some of our staff were trained, issued with FN rifles and they were with the rhino all the time – protecting them from poachers." 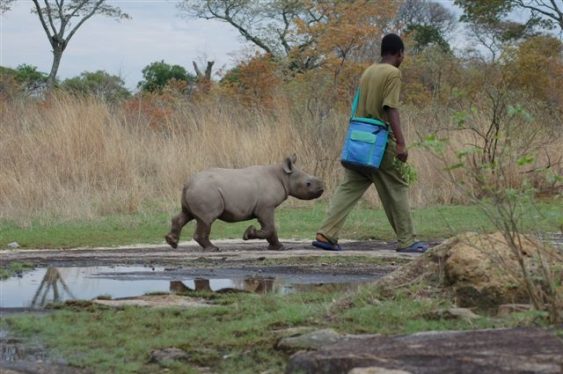 "Imire wanted to be involved in doing whatever it could to help conserve the species. I always felt it especially important to keep in close communications with National Parks. They knew we were caring for the rhino and regularly came out to see them and monitor their progress.

The seven rhino stayed together as a herd and, despite all the original scepticism about Imire’s apparently unsuitable highveld vegetation, the animals thrived! Even though they are largely solitary animals in the wild, mating and breeding did not seem to be a problem for our “Magnificent Seven” either. They reached sexual maturity in 1993 and, following a gestation of 17 months, the first calf, a female (Dangwe, meaning 'the firstborn' in Shona), was born to Cuckoo on 26th July 1994." 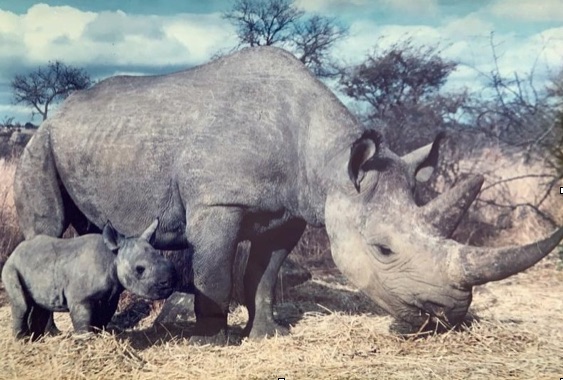 "Eleven black rhino calves were born on Imire over the next seven years. They were successfully reared to weaning age and eight were returned to National Parks, going to Tashinga, in the Matusadona National Park, on the shores of Lake Kariba."

From the original seven calves, seventeen black rhinos have been born at Imire. Today we are proud to be the guardians of six black rhinos directly descended from the original 'Magnificent Seven', and one new arrival, Kushinga, a male who was translocated to Imire in 2019 from a private conservancy in Victoria Falls. Kushinga brings further genetic diversity to Imire, so we can continue to support Zimbabwe's fragile rhino population for many years to come.

If you would like to support the work we do to protect Zimbabwe's rhinos, please visit our Support page, or send an email to donations@imire.co.zw. 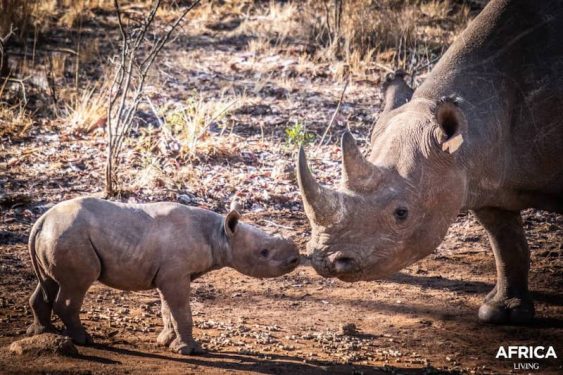 [²] "The Decline of the Black Rhino in Zimbabwe: Implications for Future Rhino Conservation" - Milliken, Nowell & Thomson (1993)